14 Challenges in Staying Remarkable
Becoming a Success by Helping Others
Being fully human - Accepting 9 Aspects of Life
Celebrating friendship and taking the high road
Change starts from each one of us
Dealing with hurting people (that hurt people)
Do you Communicate or Connect?
Embracing your Uniqueness
Execution is key to achievement of goals and objectives
Falling out gracefully
Fitness is a lifestyle, not a quick fix: Strength building week 2 (1260 minutes)
Gadgets and Status Symbol
Give Triple-A Treatment: Attention, Affirmation, Appreciation
How do you want to be remembered?
It's not easy being green - What Color is Your Brain?
Live, Love, Risk, Hurt, & Learn
My failure is my success
Personhood
Pursuing the spiritual path to happiness, tranquility, and success
The Platinum Rule
1 of 2
Previous Lesson
Next Lesson

I guess it is inevitable that if you are to establish yourself as a public speaker or a visible online personality, the gadgets you use can influence people’s perspective on you, whether you are successful or not, whether you are credible or not.

Through the years, this is something that I noticed even more as my efforts in “gearing up” escalated due to competitive or peer pressure, among other things. It is now a situation where how you present yourself can influence whether a prospective client or customer wants to deal with you.

This became more evident to me as I saw how local SEO folks in various parts of the country “flaunt” the assets bought from what they earned in their business. Recalling a speaking engagement in a nearby province where testimonial speakers showed what they were able to purchase (I have shown none) through their earnings.

During the question and answer, one participant asked how much am I earning. Did not reveal any figures and shared my passion in re-investing with new projects. After the event, the person approached me and concluded that I must be doing better since my laptop is a Mac while the others were using netbooks or affordable laptop brands. It is interesting to see how people somehow try to arrive at an impression based on the gadget you use.

Another event had me in a panel with 3 male speakers who were all sporting Macs, iPad, and the likes while I was using my well-loved Toshiba laptop. As our topic was all about social media, its typical audience are either Mac users or those who never got their hands in a Mac before. In short, my fellow speakers already had a wow factor upon seeing their gear while I have to finish my talk piece before I get my own share of wow.

For laptops, I have tried brands like NEC, Toshiba, IBM, Fujitsu, and the last one I had was MCS – which were all Windows-based. But when I got a hit by a virus a day before a speaking engagement last year, the time to fix was not in my favor and decided to get a Mac.

On the next few days and weeks in events where I spoke, non-Mac user peers took notice with a “wow”. Those who were already Mac user asked when did I switch and started giving suggestions. It is like being part of a whole new community segment. There’s this feeling that “you have arrived”.

The need for a PC

But then again, the more I use a Mac, the more I realize that I still need a 2nd machine that I can use when the Mac does not seem to cooperate with the projector used in an event. Furthermore, for web development testing, live webinars, and certified ethical hacker exam preparations.

With the pressure of having a cool and presentable gadget to use, a few brands came to mind like Alienware and Sony Vaio. However, another gadget that caught my attention lately was the Samsung Notebook Series 9 (dubbed as Sexy PC for being the thinnest).

It was lend to me when preparing for my notes at iBlog7 where Samsung was a sponsor. My Mac then was tied up for the event livestream.

The Samsung Notebook Series 9 has the following features and is priced at nearly eighty thousand pesos (P79k++): 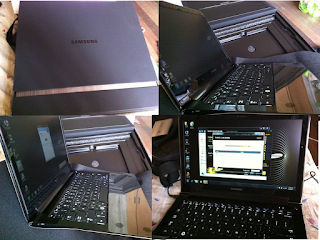 I end up purchasing the Samsung Notebook Series 9 last 2011. But the lack of a VGA plug for presentations made me use it less than intended.

Nevertheless, it is now being used by my “samurai” and glad its power is being maximized.

Yes I am still contemplating on a 2nd PC unit.

Definitely, that gadget needs to be suitable when I speak at events. Durable and tech-friendly for all the experiments and trials I will do with it.